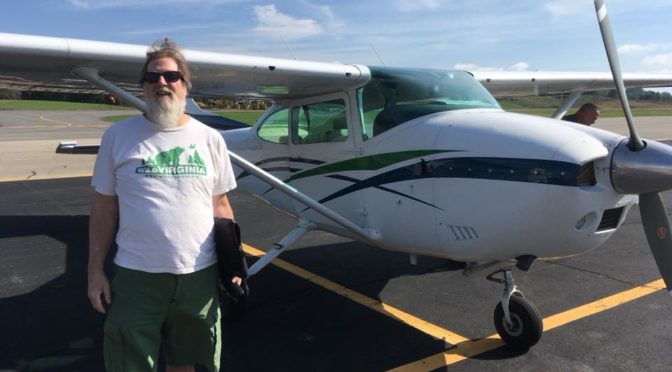 Up in the Sky Observing the Pipeline with David Sligh

In early October David Sligh, Wild Virginia’s conservation director, went up in the air with SouthWings to view the route of the Mountain Valley Pipeline (MVP) and observe the construction currently being done. SouthWings is a non-profit that works for the protection and preservation of the environment through flying over natural areas to educate citizens about their importance. SouthWings offered David Sligh a spot on two of their flights this October to be a guide to reporters that wanted to observe the pipeline from the air.

I got a chance to talk with David Sligh to hear more about this experience that gave him new perspective and vigor in continuing to fight the MVP. The flight provided the reporters and David views of the pipeline route from Montgomery County and east to Franklin County. This area of the pipeline route offered important views because it contains various stages of construction of the pipeline. These views range from swaths of both uncut trees and cut trees, grading to prepare the ground for the pipes, and sections where the pipes are already in place.

David was especially interested in looking at the pipeline in Franklin county because he heard reports that the construction crew there dug a trench and placed the pipes, but this trench has filled with water, just sitting for several months. This remains concerning because residents worry about potentially polluted water from the pipeline seeping into groundwater and wells, if the pipeline construction crew does not empty the trenches currently filled with water. The view from the sky revealed this concerning spot, with the pipe visible floating in this trench full of water.

One of the most impactful parts of this trip for David was the view of the incredibly narrow ridge tops slated for destruction in order to construct the pipeline. This bird’s eye view of the pipeline route emphasized the full extent of the mountain top removal that MVP will require. The government states that they will restore the mountain tops, but David views this as an absurd proposition, one cannot simply restore mountain tops that have been blown off.

Even in the face of this current and imminent environmental destruction in the name of the MVP, David remains zealous and ready to continue to pursue action to fight the MVP. This experience strengthened his concerns about the MVP and helped to endorse actions that Wild Virginia has already pursued with regard to the MVP.

David hopes more government officials, policymakers, and reporters can venture up into the sky and see the impact of the MVP, but even on the ground on your computer you can check out aerial views of construction of the MVP and the Atlantic Coast Pipeline.