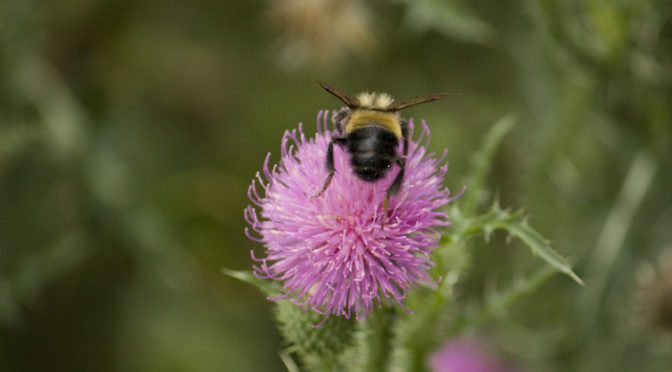 I first became aware of the Rusty Patched Bumblebee through the enthusiastic advocacy of my good friend, conservation photographer Clay Bolt. Clay has worked tirelessly to raise awareness about the decline of this species through photography, film and even testimony before Congress. As a Virginia resident, I was excited to learn that a Rusty Patched Bumblebee had been spotted at Sky Meadows State Park in 2014, the first evidence that this bee had not gone extinct in this part of the country.

In the summer of 2017, a survey for the Atlantic Coast Pipeline found a lone Rusty Patched Bumblebee in mountainous western Virginia. Because of its proximity to the pipeline route, that sighting triggered the concern of the Southern Environmental Law Center. SELC, representing Defenders of Wildlife, the Sierra Club, and Virginia Wilderness Committee, argued that the U.S. Fish and Wildlife Service had not complied with the law when it issued an Incidental Take Statement for multiple endangered species including Bombus affinis.

A closer look through my images revealed a Rusty Patched perched just below a butterfly!

In the summer of 2018, the 4th Circuit Court vacated the permits for the pipeline, and the Federal Energy Regulatory Commission temporarily halted construction of the pipeline.

Shortly before this ruling, I was contacted by private landowners (also impacted by the pipeline route) who thought they might have Rusty Patched Bumblebees living on their property in Bath County, Virginia, near where the bee was found in 2017. On July 28, I made the trek to the beautiful country home of Bill and Lynn Limpert. Bill informed me that a state agency had found a second Rusty Patched Bumblebee just the week before in the nearby George Washington National Forest. After a day of searching and photographing for RPBB with Bill, I thought I had come up a short, but a closer look through my photos of the Limpert’s back yard revealed a Rusty Patched perched just below a butterfly! The location of this individual was approximately 600 feet from the centerline of the Atlantic Coast Pipeline.

Bill and Lynn Limpert at Miracle Ridge, the area of their property slated for pipeline development.

On September 11, 2018, the U.S. Fish and Wildlife Service issued a Revised Biological Opinion for the Atlantic Coast Pipeline taking into account the new Rusty Patched discoveries. While the report acknowledges that individual bees may be killed and nests crushed, the agency maintained its assessment that the pipeline “is not likely to jeopardize the continued existence of the RPBB.” (20180917-3001 FERC PDF). However, the Southern Environmental Law Center counters that “the U.S. Fish and Wildlife reauthorized the pipeline despite new data confirming that critically endangered species will be significantly harmed by the project.”

As of September 22, pipeline construction is back on, but the Southern Environmental Law Center (advocating for Sierra Club, Defenders of Wildlife and Virginia Wilderness Committee) is already mounting a new legal challenge with the hopes of protecting the Rusty Patched Bumblebee and other endangered species in this rugged and scenic area of Virginia.

Steven David Johnson is a photography professor and conservation photographer based in the Shenandoah Valley of Virginia. He is the Vice-President of Virginia Wilderness Committee.