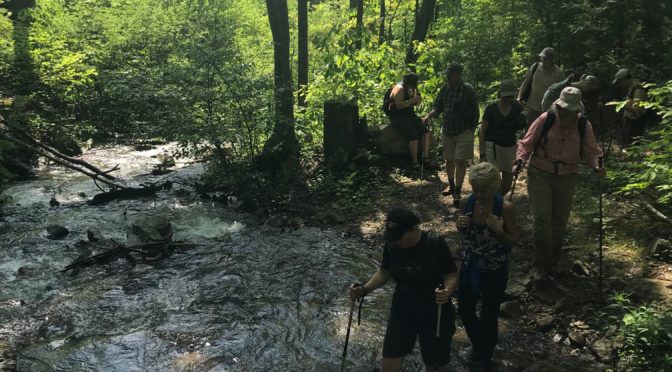 The Importance of Brook Trout Conservation

“Once there were brook trout in the streams in the mountains. You could see them standing in the amber current where the white edges of their fins wimpled softly in the flow. They smelled of moss in your hand. Polished and muscular and torsional. On their backs were vermiculate patterns that were maps of the world in its becoming. Maps and mazes. Of a thing which could not be put back. Not be made right again. In the deep glens where they lived all things were older than man and they hummed of mystery.”

The state fish of Virginia, West Virginia and Pennsylvania, brook trout are a species of fish native to eastern North America that has thrived in the Appalachian Mountains for millions of years. They inhabit clear, coldwater streams, primarily at high elevations. Brook trout require particularly clean water and cannot thrive in stream temperatures higher than 70 degrees Fahrenheit. A healthy stream can inhabit between 30 and 40 trout families.

Brook trout spawn during the fall, incubate during the winter, and hatch eggs in the early spring. The species prospers in closed-canopy forests, whose shade-cover regulates stream temperature. Since they require pristine habitats with high water quality conditions, an abundance of brook trout is indicative of a biologically robust watershed. For this reason, declining brook trout populations can serve as an early warning that the ecological health of an entire system is at risk.

When regions of forest were heavily clearcut in the early twentieth century, warming occured due to a lack of canopy cover, reducing brook trout populations. Because of their sensitivity to temperature changes, brook trout were largely replaced by rainbow and brown trout during this time. Brook trout populations have since declined extensively, for a variety of reasons (reduced water quality from runoff and acid rain, rising stream temperatures, and the like.)

Climate change is especially problematic for trout, because they require cold water habitats, which — due to human activity — are becoming increasingly rare and fragmented. Because of climate change, brook trout are shifting to higher elevation streams, with stream temperatures suitable for survival.

As climate change produces warmer winter temperatures, brook trout’s life cycle will be disrupted, as trout may emerge too early, when there is not sufficient food for survival.

One consequence of climate change for regions of GWNF and Shenandoah National Park (SNP) is high precipitation during the winter and early spring months. Longitudinal studies in SNP have found high winter/early spring precipitation to have strong negative effects on trout abundance, as flooding from extreme precipitation can threaten vulnerable eggs as they hatch. Additionally, high summer air temperatures — which will also increase with climate change — reduce trout abundance, and will force brook trout to either evolve or die off in the next two decades.

Another effect of climate change is acid rain: rainfall made acidic by atmospheric pollution and the burning of fossil fuels. In the Appalachian Mountains, acid rain has impacted between 60 and 80 percent of brook trout spawning habitat.

So, at this point, you may be asking: what can we do to save the trout? According to fishery biologist Ben Letcher, some solutions including putting more shade-producing trees along river banks; adding logs into streams; and limiting the number of wells removing cold spring water from the watershed.

Ultimately, brook trout populations are severely hindered by logging, development, and conversion of forested lands to be used for agriculture. To reverse this trend, it is indispensable that we prioritize increases in canopy cover and late-successional forest habitat in order to stabilize temperatures, continually monitor water quality, reduce sediment loads in streams, and create opportunities for brook trout populations to thrive and expand their habitat.