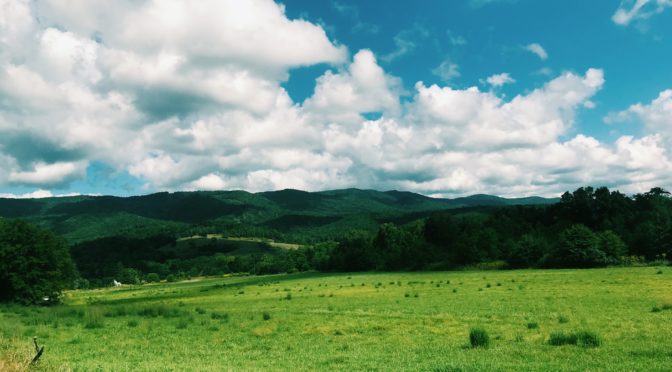 On Saturday, August 24th, Wild Virginia hosted an Atlantic Coast Pipeline camping trip in the mountains of Bath County, Virginia. While all 13 attendees enjoyed the beauty and serenity that one would expect from a weekend of camping, the trip was about much more than a weekend escape. The primary purpose of this excursion was to see and explore an area along the 550 mile proposed route for the Atlantic Coast Pipeline (ACP), a project headed by Dominion Energy, while learning about the effects that construction will have on the area. The whole group, myself included, congregated at a 120 acre piece of land, owned by Bill and Lynn Limpert, which is directly in the current path of the ACP. The couple regularly invites campers of all ages to come and listen to their personal experience and extensive knowledge of the area while enjoying the land. The Limperts act as an advocate for the land and people alike as they emphasize the multitude of ways in which the ACP will negatively impact their community and the surrounding ecosystem if completed.

Not long after our arrival, Mr. Limpert led a tour around a portion of the forest and educated all of us about his land and how it will be affected by Dominion’s pipeline. His knowledge about seemingly every aspect of the land and how it would be affected by this project-from the water quality to soil composition to species in the area-made his passion for this cause evident.  His love and concern for the land was truly inspiring as it was not rooted solely in the way it would affect him, but the cumulative effect this would have on myriad communities, ecosystems, and future generations.

After a day full of discussions and explorations as well as a night spent under the stars, we departed from the Limpert’s special spot and headed to Fort Lewis Lodge in Millboro, Virginia. The devoted owner and lover of the outdoors, John Cowden, explained how the proposed pipeline route will affect both his business and the land. He was especially concerned about the creek, depicted below, as its scenic value and water quality (and therefore the lives of all of the aquatic species that live within it) would be greatly degraded by this project. Unfortunately, John’s situation is not the only one of its kind. Thousands of home and business owners are facing uncertainty in regard to the land they love and value for the sake of the Atlantic Coast Pipeline.  The good news is that this fight is far from over. There are various ways that we as individuals can help this cause and influence real change. The Atlantic Coast Pipeline camping trip opened my eyes in many ways, but more than anything empowered me to believe that we can make a difference through our actions.

This weekend long adventure was truly unlike any trip that I have ever been on. I received an immense amount of insight into the activity surrounding the Atlantic Coast Pipeline from a variety of people including scientists, lawyers, passionate citizens and homeowners who will be affected, all while observing the beautiful mountains of Virginia. It was an extremely special experience that shed light on the reality of the ACP and has inspired me to take action against environmental injustices of all kinds since returning. To learn more about the pipeline and how to get involved, click the link below!

CLICK HERE TO LEARN WHAT YOU CAN DO TO HELP